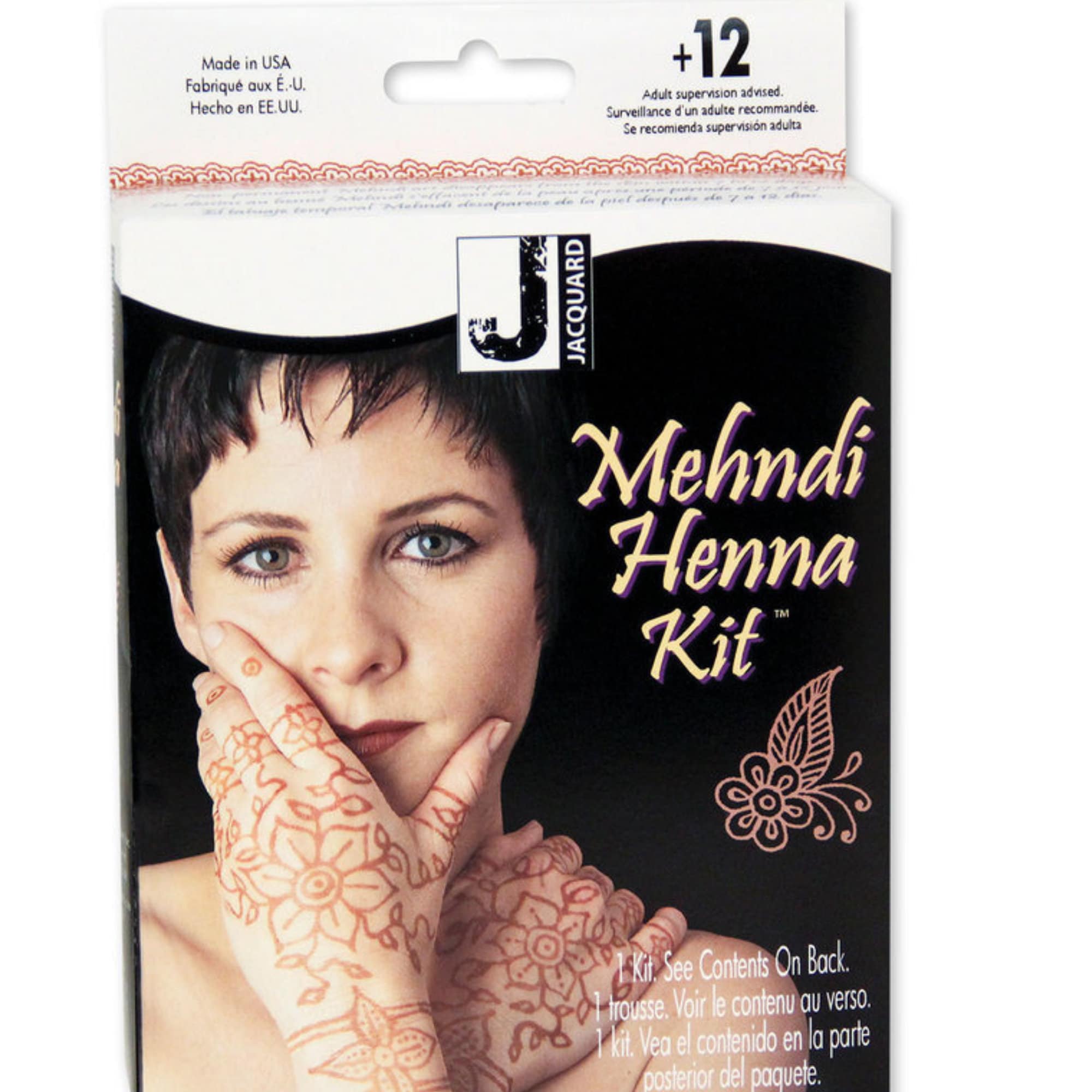 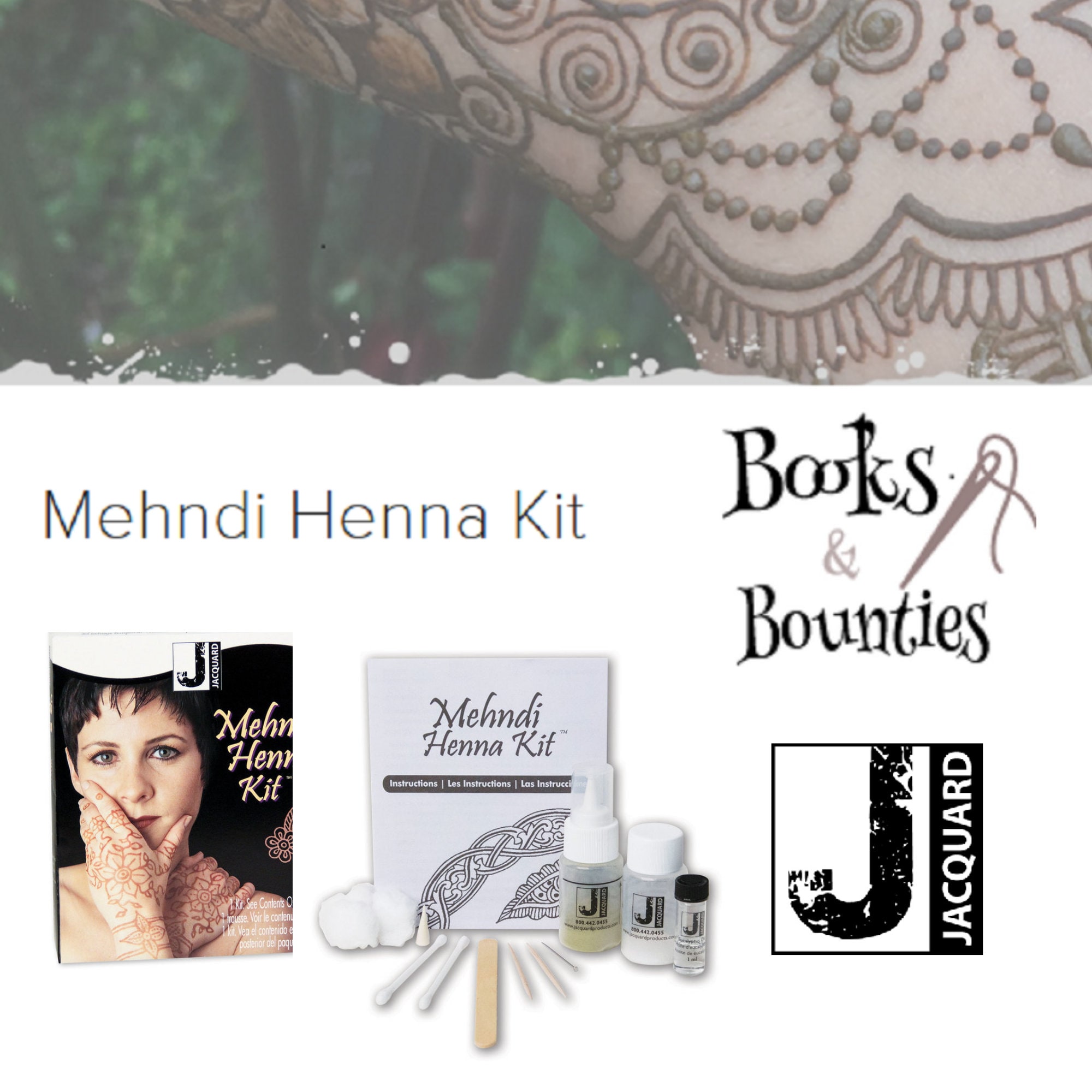 All the tools and supplies you need are included in this kit:

Toothpick for editing the design and thinning lines

The Mehndi Henna Tradition For over 5,000 years, the people of India, Africa and the Middle East have practiced the beautiful and mysterious art of painting on the body with preparations using the henna plant. In India, and here in the West, the art form is referred to as Mehndi.A special henna power and specific liquid ingredients are mixed to a dark paste.

Using an applicator, linear designs are drawn on the body. After the paste has set, the paste is removed and reddish brown markings remain on the skin. These designs last 7 to 12 days on the skin, fading gradually until they disappear. This is why Mehndi is likened to a temporary tattoo.

The henna plant comes from Egypt where it was called Egyptian Privet. In the Caribbean it was called Jamaica Mignonette. Henna was brought to India as a state gift from the Egyptians. Queen Mumtaz who ruled in the 1600’s was the first Indian queen to be decorated with henna. The Taj Mahal was built to honor her. Today, it is common to find Mehndi artists practicing their craft just outside the Taj gates. In India, the peacock is a popular motif in Mehndi because it is a symbol of love, luck and abundance. Traces of henna have been found on mummies from as early as 1200 BC. As long ago as 632 BC, the prophet Mohammed was said to have dyed his hair with henna.

Traditionally in India and Morocco, Mehndi is drawn only on the hands and feet. But you can apply it anywhere. Feel free to create your designs on arms (perhaps as arm-bands), on legs, around the naval, behind the neck... or anywhere you want.
Henna does not work as well on the face or chest, the color usually comes out quite light and fades quickly.

Traditionally, Mehndi is an important part of wedding ceremonies. The hands and feet of the bride are decorated by members of her family or professional henna artists (called Hannayas in Morocco).

The intricate designs cover her hands and feet like a lace glove or stocking. Wedding rituals differ between countries, but the common belief is that Mehndi brings good luck. Ornamenting the bride’s body with henna is believed to bring love, prosperity, health, safety in childbirth, protection from harmful spirits and assure happiness in heath. If the designs last a long time on the bride’s skin, the love between the couple will last forever.

In the West, henna is most commonly used to dye hair. But with the new popularity of tattoos, henna and the art of Mehndi is now considered a safe, painless and non-permanent alternative form of body ornamentation.

Things you should know about practicing Mehndi Henna stains the skin for 7 to 12 days depending on body temperature, skin type and lifestyle (per-spiring and bathing).

On the skin henna can vary from orange to reddish brown, to russet, café au lait brown, light brown, through dark brown, crimson red and burgundy. For the darkest, longest lasting stain, the henna paste needs to remain on the skin 12 to 15 hours, or a long as possible, before removal. Henna stains only the outer layers of the skin.

As the skin exfoliates the design will disappear completely.
Re-application of henna over an existing design will deepen the color and forestall fading.

But please contact me if you have any problems with your order.

0 items in your cart